A Christian in Hijab

By Marjorie RobertsonA year ago in university campuses across the United States, students and staff marched and held rallies advocating education reform and protesting recent tuition hikes, salary reductions, and layoffs. On my lunch break one day between teaching classes at the University of California, Irvine, I made my way to the Student Center, past the booming chants of protest, the students of the Korean Club selling $2 cups of Bobo tea and a local rock radio station giving away t-shirts.

One small booth made me pause. Pamphlets in hand, scarves on their heads, a group of young women from the Muslim Student Association were speaking quietly to passing women. I stopped to ask what they were doing. They told me that non-Muslim women were being given the opportunity to wear a hijab for 24 hours to experience what Muslim women experience. In the end, the women could keep the beautiful scarves.

Immediately I thought of my sister, who converted to Islam while a graduate student at the University of Wisconsin-Milwaukee 18 years ago. It took some years for the family to adjust to my sister’s conversion. Although we were not raised as strict church-goers and belonged to perhaps the most open of the Protestant denominations, the Disciples of Christ, her leaving the faith in which she’d been raised was like a personal betrayal and a sign of loss of the girl we knew and loved. As for me, I groped forward in understanding it while on the outside playing the role of supportive sister.


My sister, my leader, the maverick of the family with pretty hair and an hourglass figure, the runner of marathons who approached life courageously, was choosing to cover and change what I had admired and dreamed of emulating all my shy, self-restrained life.

But I could not deny the fact that my sister was and is still very much like my sister, only more so. To be sure, she adjusted her physical activities, but changed in her increased faith in God and determination to live life on her own terms. Today she reminds me of our mother and departed grandmother, whose Christian faith was immovable, guiding them while challenging their faith through hard times. Since her conversion, true love for one another has carried us through every small challenge.

I decided to “Take the Hijab Challenge” as a way to identify with my sister in a new way and to come to peace with any lingering tension I still felt with her when in public. Part of taking the challenge included signing an agreement basically stating that I would wear modest clothing and behave toward others with respect. A handout was also given on what the hijab means to Muslim women—that it is a personal decision between a woman and God, a sign of the respect that must be given to a woman wearing one and ultimately the prevention of objectification. The handout also noted that the custom of covering one’s head is practiced in different forms in many cultures. It all made perfect sense to me.

Going With the Challenge

Although it must have been clear to them that I was not a student and perhaps not what they had in mind, they giggled and cheered as I chose a scarf—a soft, large-weave cloth in purple—and took a picture of it being adjusted and fitted properly until finally, with the scarf in place, shades on, big smile on my face, the deed was done.

And my journey began. I entered onto a path with innocence and curiosity, unaware and unafraid of what was to come, as my mother would later note.

It is just a scarf and not just a scarf. I may never fully understand this, but have had a taste of what it means to wear one.
At first as I headed toward the Student Center to find something to eat, I felt a growing joy at seeing other women wearing hijab for a day—recognizable for the purple or turquoise options from the booth—and an overwhelming sense of belonging. We smiled and waved to each other across the courtyard apparently elated at what we saw.

While standing in line to get lunch, a woman who appeared to be my age grinned when she saw me. It’s an experiment, I told her. It’s beautiful, she said.

While some people stared, most casually glanced and looked away. Women were the most likely to stare. Men barely gave me a second look. One young woman approached me from behind and asked why so many women were wearing headscarves, and I told her. Oh, she said and shrugged. Her reaction was most common—it did not seem to matter to most young people what I had on my head and why. The bit of extra attention, however, did make me feel uncomfortable.

On the way to my office building, I ran into a manager from my department (not my direct supervisor), a father of two girls known by my colleagues for his compassion. I told him I was taking the challenge and asked, jokingly, whether he thought I’d be fired. I don’t know was his deadpan reply, which shocked me into silence. As I walked, I wondered whether he was serious (unclear), whether it was possible (probably not because it would be illegal) and considered the situations Muslim women face perhaps daily in the United States in a culture where a headscarf is not the norm (perhaps beyond my grasp).

Nearly to the door, a woman I’ve socialized and worked with for two years had an immediate, argumentative reaction to seeing me wearing hijab. She said it was wrong to require women to wear it and spoke of the Burqa debate in France. There the Prime Minister and Congress were debating passing a law prohibiting the wearing of a full body veil—or Burqa—that covers the entire body, face, and frequently the eyes with small holes for viewing. It was said to be an affront to the principles of the country—of freedom and equality. A country has the right to stand on certain principles and anyone who doesn’t like it doesn’t have to live there, she said. I understood her point (and the idea that the way of protecting women was to not see the perceived problem, but I didn’t say this) and attempted a discussion with her about it, but she was on her way to class and went away quickly. From that moment, our new friendship suddenly became more subdued.

In graduate school in the late 1980s, I studied immigration issues and read the Qur’an, trying to better understand the current European social issues. At that time I interpreted wearing hijab, covering the hair and neck, as a religion forcing women to be responsible for the weaknesses of men, which seemed unfair.

My view has since shifted. Although I admit that the Burqa, which appears to reflect a loss of identity and existence, makes me uncomfortable, there are far greater challenges in the world and in my own culture that show blatant disrespect for women that result in suffering and in some cases violence.

Write for us, send us your contributions via the editor's e-mail: rasha.mohamed@onislam.net.
Regardless, my view has always been that a government of a pluralistic society simply cannot go around telling people what to wear or not wear. And if it tries to do so I don’t see how effective it could be in repairing the stated problem. The true issue in France—xenophobia or the discomfort of non-Muslim French citizens or the inability of the Government to protect Muslim French women—is much harder to tackle. I would’ve explained this to my friend, if the opportunity had presented itself.

At my desk in the office, some male colleagues who teach English-as-a-Second Language were openly pleased and encouraged me, saying it looked nice and was an interesting experiment. They spoke of students who wore hijab and Burqa in their classrooms. Later, I made copies of the handout for a few people in the office who’d asked to read it, including the woman who had previously been dismayed. The discussion ended there as teaching and prepping for classes were more important.

After an intense few hours, my decision to remove the scarf was a practical one that I made reluctantly and admit with embarrassment in light of my initial enthusiasm. My students were to give presentations that day in our small classroom and had never seen me wear hijab before. Drawing attention from the moment, their moment, might have been perceived as being foolish and unprofessional. In addition, the scarf had begun to slip off my fine hair and so after only a few hours of internal questioning and struggling to keep the scarf in place, I called it quits and let the scarf fall to my neck.

But what a journey it was! At the end of the day I most remembered the willingness of the young Muslim university women to stand at a booth and call to women over all the noise to come over and consider this piece of fabric, to try, just try something perhaps they’d wondered about, just as I had.

My sister was born on the Spring Equinox, March 21st, a symbolic time of rebirth in our culture. The scarf went to her as a birthday gift; although she does not celebrate birthdays, she accepts that I do. One night on the phone she surprised me by asking whether I’d given up anything for Lent (a custom followed to show faith and understanding of Christ’s suffering). All I could say was that it had always been and still is a more contemplative time for me, one of growing happiness, not of hardship. She agreed, saying she’d always liked Lent for that reason before becoming Muslim.

Later I realized that during the holy Christian time of Lent, it turned out that I had given something up in a small way—the shoulds and should nots, the will and will nots, the can and cannots—those things that trap me in my thinking about myself and others.

It is just a scarf and not just a scarf. I may never fully understand this, but have had a taste of what it means to wear one.

Marjorie Robertson teaches writing and communications to international students at the University of California, Irvine. She grew up in Wisconsin and has traveled throughout the United States and to some countries abroad 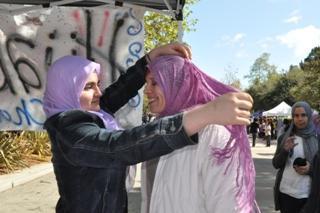 p/s : maybe we can try it in Malaysia ? In our own university :)

Quote of the day!!